Is the Energy Market Working?

I've been out of the game (as they say!) for 3 years now but have been excited to get back in to the energy industry and see what has changed, how the industry has grown, how many people are switching their gas and electricity suppliers and how good the new proposition is for customers looking to finally take that faithful leap and switch.

I know only too well that the energy industry has historically moved at pedestrian speed. Lacking in innovation and technical agility, it's always been hamstrung by large legacy systems that make the simplest change as challenging as a lunar landing. However, I've remained ever the optimist with the emergence of the new generation. Energy suppliers looking to make their mark on an industry screaming out for a revolution and re-birth to take it forwards and provide not only a good price but great customer service and a user-experience worthy of the 21st century.

So, after 6-weeks back in the game, what have I learned?

The energy market has gone from a relatively exclusive space dominated by the "big six" to one now boasting +70 energy suppliers giving customers a huge selection to choose from away from the "big six" who a few years ago held on to +90% of the market. Wow! How that has changed. SSE has gone from holding ~9m domestic energy accounts just a few years ago, and being the UK's second largest energy supplier, to now selling their retail business to relative newbies Ovo Energy in a deal worth £500m for their remaining 3.5m customers. Equally, British Gas (owned by Centrica) has had a torrid time seeing their dominance diminish month by month as customers vote with their feet and switch elsewhere (e.g. 36% of switches in Sept-19 were from Large to Small/Medium sized suppliers).

Energy switching has improved with the introduction of the 'Energy Switching Guarantee' enabling consumers to switch energy supplier in 21 days and "next day switching" is on the way (apparently!).

•  Collective switching is engaging the disengaged.

This is great to see. Councils and local communities are clubbing together en masse to switch people to a better deal. This not only gets customers a competitive rate, but it's also engaging with those who have otherwise refrained from switching and therefore languished on overly expensive default energy tariffs paying through the nose for their loyalty.

With only 19.1% of the market switching perhaps there is still a mis-conception that it's too difficult or time consuming so automated switching services have emerged to take the perceived hassle e.g. 'Look After My Bills' which appeared on BBC2 hit show 'Dragon's Den' and has since been acquired by Go Compare for a potential £12.5m (not bad for a business that has been around for just over 3-years and has 150,000 customers). The Go Compare marketing team have hit the ground running with this and already applied their magic to get lookaftermybills.com ranking (see below).

Some new suppliers really are a breath of fresh air. I switched to Ovo Energy shortly after joining TheEnergyShop.com and have been very impressed with the experience. They communicated quickly and consistently throughout the process and the app is a doddle to use for checking my usage and submitting my meter readings (essential for accurate billing...I haven't got a Smart Meter yet!).

It's great to see green energy tariffs essentially losing their historic premium that plagued them for so many years in the past making them too expensive for the masses to switch too. Instead, we're now seeing suppliers such as So Energy, Bulb and Pure Planet offer competitive prices as well as getting their electricity from 100% renewable sources.

The industry is still working off excel spreadsheets. This is more of an industry gripe that doesn't effect customers but is still a thorn in the side of all energy price comparison websites and suppliers alike. Not only is this an incredible waste of time and effort to input data, check and release but it risks leading to inaccuracies between websites and human error which could result in in-accurate comparisons. Come on guys! Where are the API feeds? Suppliers advise me they are in the process of switching to APIs but again it's the smaller suppliers leading the way with the old suppliers trying to fathom what an API even is.

Have you ever been to a restaurant where you're given a book rather than a menu? Instead of enjoying a drink and talking to your partner/friend you sit with a glazed expression on your face as you try to decipher what the menu says and what to choose. Let's be done with this endless list of tariffs and move to a simpler more uniformed portfolio.

Energy switching in 2018 was shown to be 19.1% of the market. Let's flip that around...81.9% of the UK (4 in 5 of us) aren't switching despite savings of +£300 being available and that figure is only marginally higher than it was in 2010 at 17.3%. I actually don't like the monetary illustration of "up to £300" as it's not reflective for the individual e.g. if my bill is £700 a year do I really believe I can save £300?! So, in other words the savings available are 25%. Twenty five percent for the same product. The same gas. The same electricity and in most cases better customer service and a better user-experience. 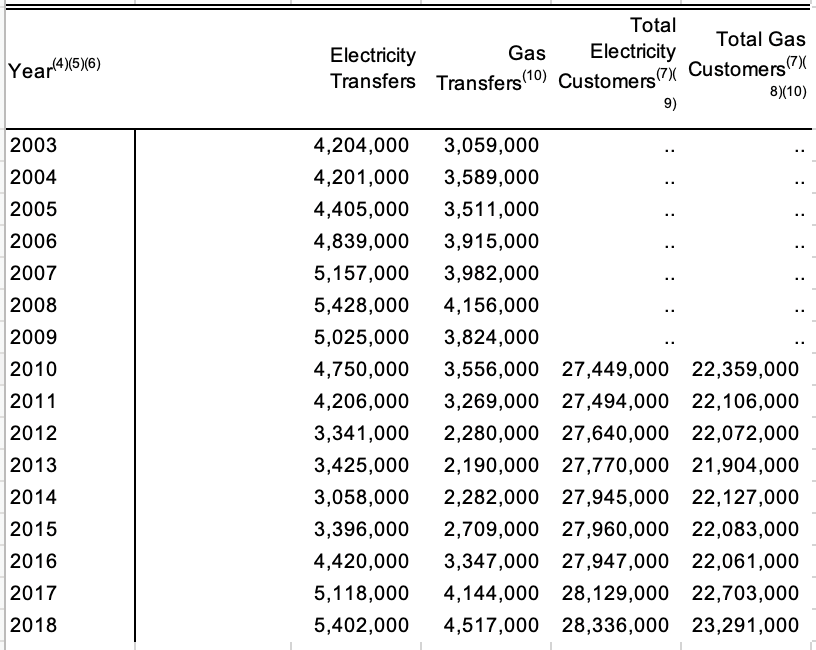 Price Comparison Websites (PCWs) such as Go Compare, uSwitch, MoneySupermarket.com and TheEnergyShop.com (when it comes to energy), earn a commission for each switch they/we generate. That commission varies between £20 - £35 per fuel (£40 - £70 per customer) and is factored in as a marketing cost by the supplier to acquire that customer as they would if it was through TV, radio, social media or any other marketing channel. Nothing wrong in that. However, with suppliers quoting margins as low as ~2%, this isn't a sustainable model. We're already seeing energy suppliers request for certain tariffs to be excluded from automated switching services and reduced commissions are going to weaken the appeal for PCWs (and others) to support. That's not a case of IF they reduce commissions (known in the industry as CPAs) but WHEN. Was it therefore worth £12.5m for Go Compare to acquire LAMBs and launch their own WeFlip service? Who knows but we'll be sure to find out in the coming months if this lifetime value model works. RNS alerts at the ready.

Wow! If I put a bet on back in 2010 to say the deadline for 2020 wouldn't be reached I'd be quids in today. Trying to push through a deadline of installing 28m smart meters when for many years the final specification hadn't even been finalised was a disaster waiting to happen. It's resulted in many homes having SMETS1 meters installed which don't comply to the required standards and mean that customers lose the functionality of the meter when switching between suppliers. These customers therefore need to get a SMETS2 meter replacement booked in which most suppliers are now doing but again it's more time and more cost.

The energy switching market is fragile and the last thing we need is suppliers dropping out of the market because they got over-excited and took on too much, too quick, with too little in the bank. The market witnessed 11 suppliers go bust in 2018 and already in 2019 (Jan - Sept) we've had 9 either go bust or sell out (e.g. SSE). It's not the suppliers I'm bothered about (they're big enough and ugly enough to make their own decisions), but the customers who have switched to them and now have to look to who their new supplier will be (a decision for Ofgem under the "Supplier of Last Resort") and how they recoup any credit they may have had on their account. I think more will follow too with the end of October being a key area as suppliers settle charges imposed from their Renewable Obligations. If they cannot meet these payments, they're going to struggle to keep their head above water and risk having their licence revoked.

In summary, it's been a whirlwind 6-weeks with plenty of phone calls to old contacts in the energy market and despite a few things ruffling my feathers in the main I think we're heading in a good direction. I still think suppliers should simplify their proposition with fewer tariffs (as we're seeing from the likes of So Energy) but overall consumers now have choice, good customer experience, competitive low carbon energy and the optimist within me still clings to the future of what this market can be. I'm therefore ultimately delighted to be back, involved and able to play my part no matter how big or small that may be.

Fully accredited by Ofgem since 2003