After a relatively quiet summer, things started to heat up again in September.

In the wholesale markets, gas and electricity prices again started to edge higher as supply was squeezed due to power outages at certain power plants and a drop in LNG deliveries.

Despite rising wholesale prices there was no moment in the Standard Variable tariffs of the Big 6 - for now at least.

The stand out developments of last month were two-fold;

Countering that development was a resurgence from 4 of the Big 6 (EDF Energy, E.ON, npower and SSE) offering cut price deals. The catch? These deals are only available through accredited price comparison websites like TheEnergyShop.com and are further restricted to new customers only.

These deals have taken the fight right back to the smaller energy suppliers and, going into a potentially volatile winter period, it will be interesting to see how, or even if, the new entrants will be able to respond. Co-operative Energy, now a mid-tier supplier, has, at least for now, pulled out of the contest.

Despite the wholesale energy price trend, the price of the cheapest energy deal (2) fell by &pound18 to &pound760. Consequently savings from energy switching increased to &pound344 - up from &pound325 in the previous month. 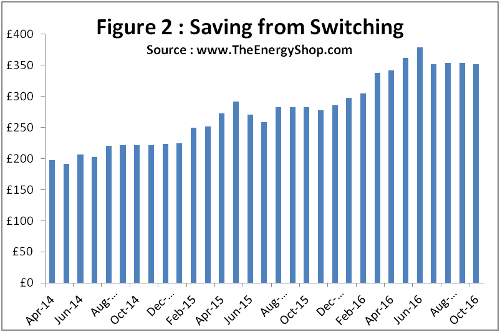 "Average savings from energy switching have increased to &pound344 which is great news for switchers going into the winter period when your average energy usage is at its highest. While existing loyal customers may feel aggrieved that the cheapest deals are not available to them, it is a reflection of the energy market - loyalty seldom if ever pays."

"Just because you can't get the cheapest deal from your own supplier doesn't mean you have to end up paying &pound100's over the odds. There are plenty of offers from other energy suppliers to choose from. But make sure you check out energy price comparison sites like TheEnergyShop.com - that is where the best deals are these days."

"If you are a Co-operative Energy customer you should cut and run. They have no compelling competitive offers and customers on their Standard tariffs can save a spectacular &pound392 by switching."