Wholesale markets continued to rise strongly during the month of October fuelled by mandatory nuclear plant outages in France (which increases the risk that electricity imports from France will drop when the supply / demand outlook is tightest over the winter months), as well a drop in LNG deliveries to the UK. During the month of October, gas and electricity wholesale prices were up by approximately 15% and 20% respectively.

The notable feature of the past month was the resurgence, from 4 of the Big 6 energy suppliers (EDF Energy, E.ON, npower and SSE) offering cut price deals to new customers only exclusively available through energy price comparison websites.

As a reminder, here is the list of the cut price deals from the Big 4 in the order in which they appeared.

It is worth noting that British Gas, through the Sainsbury's Energy brand, also had highly competitive tariffs throughout the period, and indeed continues to do so. However, we have not included these in the table as they were not restricted to new customers only, nor was availability restricted to price comparison websites.

These deals turned out to be relatively short-lived with the longest available for 2.5 months while the shortest was around for only 1 week. They have all been removed, for now at least.

Does that mean that the smaller energy suppliers will have the energy market back for themselves? We think not. In our view this withdrawal is likely just a temporary pause while the larger suppliers manage the volume of new customers they have acquired, and before a new wave of cut price deals comes back on the market. In the post CMA world, cut price deals for new customers will likely become much more common and smaller suppliers will have a lot more competition to deal with.

Thanks to the intervention of the Big 6, savings from switching hit a rather tasty &pound347 during the month of October. However as those deals have been withdrawn so savings have also shrunk, down to &pound290 currently (Note 1).

Last month we commented on Co-operative Energy's increase in the price of its Standard variable tariff.

At the time of the increase announcement we commented...

"Is this telling us something about the energy market, or about issues at Co-operative Energy? We suspect the later but time will tell."

Well it did indeed turn out to be partly the latter as, at that time, pressure in wholesale markets was nowhere near as extreme as it is now.

Since then we have learnt that Co-operative Energy has been forced by Ofgem to pay &pound1.8 million to customers for customer service failings including failures in complaints resolution, call handling and billing (Note 2).

Which leads us to a different any possibly more troubling development.

GB energy supply, one of the band of recent new entrants, hiked the price of its Standard Variable tariff (Premium Energy Saver) by 29%, from &pound820 to &pound1060 (a &pound240 increase). While this is still cheaper than the Standard tariff of Co-operative Energy it is now in line with the direct debit Standard prices of the Big 6 and more expensive than those of British Gas and E.ON.

If the Co-operative Energy price hike was disturbing, then this is positively alarming.

By way of background, GB Energy Supply can to market in January 2015 claiming to offer better deals "By running a highly efficient business and keeping our own costs low".

They began growing rapidly from April 2015 when they cut their prices to offer some of the most competitive tariffs in the market. From November 2015, GB energy supply began offering extremely competitive 1 year fixed deals. All generally good news for customers with the exception that customers need to pay in advance of coming on supply - something we are not particularly keen on.

In the process, it was reported (Note 3) that as of May 2016, GB Energy supply had acquired 135,000 customers with revenues approaching &pound100m.

With respect to their financials, GB energy supply reported net losses of &pound630k on revenues of &pound22m to year end 31 December 2015. They did manage to build up a cash pile of &pound1.8m (payments from customers) but this is required to pay short term creditors which stood at &pound7.1m.

So why is GB energy supply increasing its standard variable prices so significantly now? One possible reason could be this.

The first GB energy supply fixed deal, Fixed 12 Emerald, begins expiring later this month. Customers coming to the end of that deal are going to be faced with a hefty increase of &pound261 on their energy bill. We expect that GB energy supply has a large proportion of its customers on this tariff. A &pound261 increase for say 10,000 customers brings in incremental revenue and profit of &pound2.6m.

"Average savings from energy switching are still close to &pound300, but falling quickly as the price of the cheapest energy deals increases. There is little point hanging around and getting caught with a hefty and over-priced energy bill particularly as winter approaches. It really is time to get yourself a discounted fixed deal, and to do it quickly.""

"Customers of GB Energy supply need to be particularly careful. Customers coming to the end of a fixed deal stand to see their energy bill increase by a whopping 33%. They should take early steps to make sure they are not caught out by this price increase. There are currently no exit penalties for leaving GB energy supply so leaving early may be the prudent option."

And now for some Charts 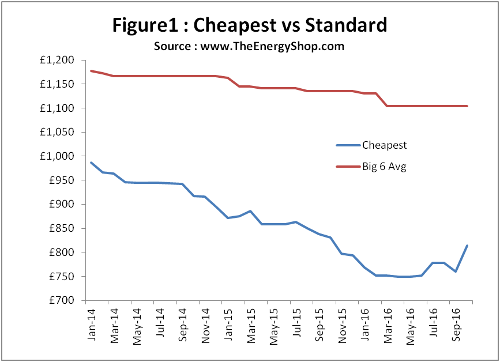 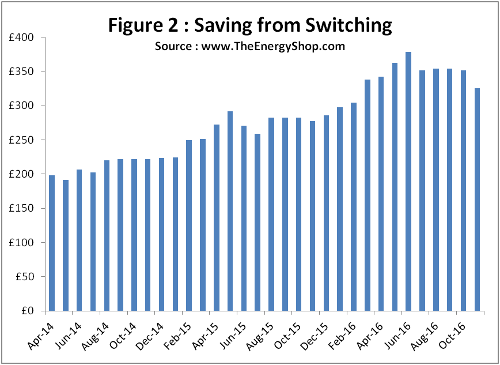 Back to Charts and Analysis