Energy bills have bottomed - it is time to switch energy supplier

According to research from award winning energy price comparison website TheEnergyShop.com, the cost of the cheapest energy deals in the market has plateaued and is now more likely to rise that fall over the coming months.

TheEnergyShop.com is recommending that consumers take advantage of historically high spreads between Standard tariffs and the cheapest energy deals to lock in savings that have not been seen in 10 years, before energy prices start rising again.

It is well know that there has been a spectacular crash in oil prices over the past 2 years. Oil prices crashed from a high of over $114 a barrel in June 2014 to a recent low of &pound28.82 in February 2016.

Since then, and despite some forecasts predicting $20 and below, the oil price has recovered strongly. According to the EIA (1), Spot Brent has risen in each of the past 4 months and is now 65% up on its February lows.

Rising oil prices have already started to work their way into higher petrol prices. Petrol prices fell below 100p a litre for unleaded at the beginning of the year, but have since started to creep back up. According to the AA (2), average unleaded prices are now running at 109.2p per litre, 10% above their 2016 lows.

With many gas purchase contracts pegged to the price of oil, albeit with a lag, rising oil prices imply rising gas prices over the coming months. Indeed wholesale gas and electricity prices have not been immune to what has been going on in other energy markets.

From a low of under 1p / kWh in January 2016, the 1 year ahead forward price of gas has increased by over 20%, to over 1.2p / kWh. Wholesale electricity prices have risen by around 15% over the same period.

On top of that there are further built in increases coming for household electricity bills as a result of government policies. The CMA report stated that, on the basis of current announced plans, DECC estimates that climate and energy policies will add 37% to the retail price of electricity paid by households in 2020 (3). This forecast is of a longer term nature than the recent movements in energy markets, but bear in mind that 37% is a big number and 2020 is really not that far away.

The cheapest energy tariffs have not yet started to rise; but they are also no longer falling.

Analysis from TheEnergyShop.com shows that the cheapest tariffs in the market, typically 1 year fixed deals, have tracked oil prices lower over the past 2 years. Since January 2014, the market's cheapest deal 4 has fallen from &pound986 a year for a household with average energy usage to just under &pound750 today. This is shown in Figure 1. What Figure 1 also shows is that those price falls have stalled over the past 4 months, even as the level of competition has increased. 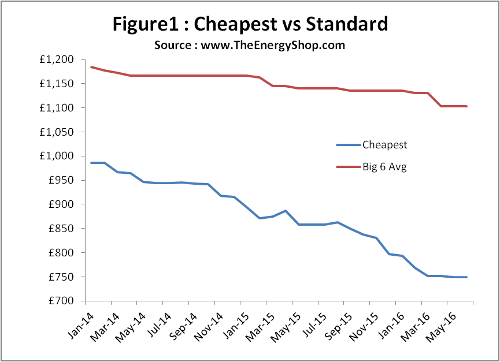 According to TheEnergyShop.com, energy tariffs have yet to head higher but that is now the greater risk. Despite rising wholesale gas and electricity markets, the cheapest energy tariffs have been stuck at low levels for 4 months, a position which is not sustainable. TheEnergyShop.com believes this could be happening because smaller suppliers are buying seasonally low priced energy and selling it forward on 1 year contracts hoping that spot prices stay low. This would work if spot prices remain weak. However, it could also end in disaster if seasonal prices rally into the winter or an unexpected event shifts wholesale prices higher. Customers who have paid their bills in advance would be left with their money at risk.

The warning signs are that this will now start to reverse. It is time to take the money on table and lock away a cheap fix before prices start heading higher.

"Falling energy prices has resulted in a savings bonanza for those who are prepared to switch. Customers on standard tariffs can still save over &pound350 a year moving to a discounted fixed tariff."

"The leading indicators are now suggesting that the best is probably over. With an increasing risk that the cheapest deals will start to rise, it is time to take the money on offer and lock away a competitive 1 year fix while prices are today"s low prices."

"But be careful who you switch to. Several of the smaller energy suppliers take payments in advance of the customer coming on supply. This means that the customer's money is at risk if things go badly. Do your research and understand the risk of switching to a smaller supplier."

4. Cheapest deal in market as at the first day of the month.

Back to Charts and Analysis