This brief note provides an update on energy prices and potential savings from switching.

As we predicted in our note of 2 June 2016, entitled Energy bills have bottomed. Time to switch!, the price of the cheapest energy tariffs bottomed at the beginning of June 2016, and has been on a steady rise since.

Much has been written about Brexit and energy prices recently. To be clear, Brexit did not cause this. The energy markets bottomed as early as February 2016 and some, like oil, have risen significantly since then. Energy prices were heading up with or without the Brexit vote. Brexit did however help push the thing along (as a result of the approximate 10% devaluation of sterling versus the US dollar since then).

Over the past 2 months the cheapest energy tariff has increased by £29.

Standard variable tariffs for the Big 6 have not changed since they were last cut by £32 in March/April (Figure 1).

Consequently savings from switching have contracted by &pound53 from a record high of £378 in March 2016 to £325 in August. 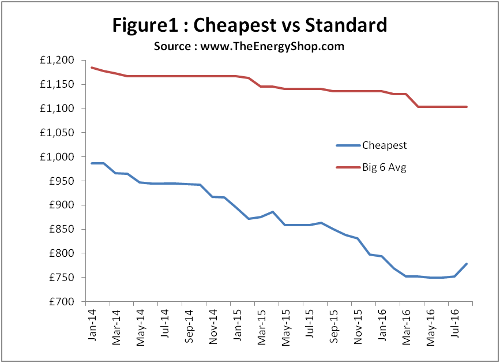 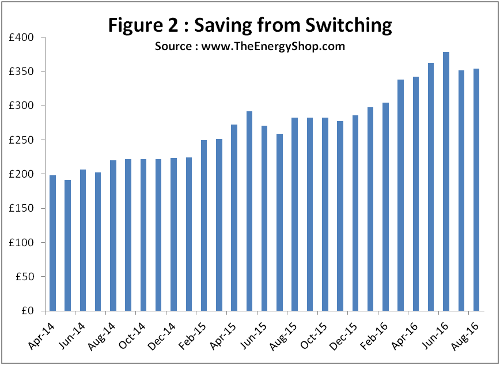 "The best possible savings are now gone and will not be coming back any time soon. The good news is that savings from switching, at &pound325 for the average domestic household, are still extremely high by historic standards. Now still remains a great time to switch and bag some incredible savings before prices increase further."

"A word of caution; be careful who you switch to. Several of the smaller energy suppliers take payments in advance of the customer coming on supply. This means that the customer's money is at risk if things go badly. Do your research and understand the risk of switching to a smaller supplier."